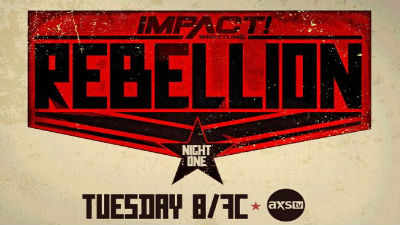 Preview :  Rebellion is now a two-part television event airing April 21 and April 28 on IMPACT! Check out the lineup for Night One this Tuesday at 8/7c on AXS TV and Twitch.

After weeks of build up, Sami Callihan revealed that he was the man behind the string of ICU hacking incidents when he interrupted Ken Shamrock’s Hall of Fame induction announcement and threw a heinous fireball into his face. Shamrock and Callihan were then involved in a heated war of words on Twitter which ultimately led to IMPACT Wrestling management stepping in and making the match official. Callihan has claimed that, unlike in other wrestling companies, here at IMPACT! Wrestling veterans like Shamrock don’t get to come in and take opportunities away from the young talent – they have to earn their spot. Callihan has not held back when it comes to playing mind games and it has led Shamrock on a path of destruction. What will happen when The World’s Most Dangerous Man gets his hands on the vile Sami Callihan? Find out at Rebellion.