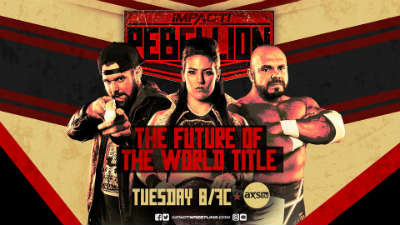 Preview :  Rebellion is now a two-part television event airing April 21 and April 28 on IMPACT! Check out the lineup for Night One this Tuesday at 8/7c on AXS TV and Twitch.

Due to unforeseen circumstances, World Champion Tessa Blanchard and Eddie Edwards were unable to make it to Rebellion for the three-way World Championship match with Michael Elgin. IMPACT Wrestling fans around the world are wondering – what is the future of the World Title? To add fuel to the fire, Michael Elgin claimed that one way or another, he will be World Champion by the time Rebellion is over. All will be revealed at Rebellion Night Two.

Plus, World Champion Tessa Blanchard will participate in an interview to shed some light on the World Title situation.